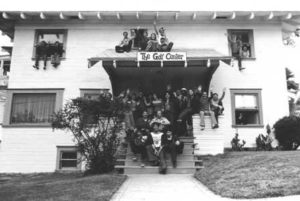 The First March?
One of the most contentious years in San Diego Pride history is 1974. For many years, 1975 was considered by Lambda Pride to be the year of the first Pride march. However, many people pointed out that there was a march in 1974 and that to not count it would be a disservice to the people who were brave enough to march. Others felt that 1975 was somehow a more official event for various reasons.

Fading Memories and Scant Records
Clouding the issue even further is the lack of photographs or a clear record. There were precious few gay publications at the time, and the mainstream papers were far from gay friendly. The passage of time has also contributed to confused and fading memories as years have blurred together. What is clear is that a march did occur in 1974, although it may have lacked a permit or official sanction from the city and the precise date is unknown.

The Center did recognize the anniversary of Stonewall with a Gay Pride Celebration on Saturday, June 29th, with a yard sale and potluck and it is possible that the march took place that same weekend. An event called a 500-mile run began at the L.A. Gay Pride site on Saturday and ended at Bee Jays on Sunday morning. Bee Jays was a gay bar located downtown on India Street adjacent to Newtown Park, also known as Hobo Park, where many marches would begin in years to follow.

Forward… March
The march began downtown at Newtown Park and proceeded to Balboa Park. Fred Scholl, who was on the board of the Center at the time, estimated that there were approximately 25 people who participated in the march. According to Scholl and Jeri Dilno, the march proceeded along the sidewalks because they lacked a parade permit.

There is no record of a rally after the march, but Fred Scholl recalls that participants met at the Center after the march to talk about what they had done.

The lack of a permit and the small size of the march may account for the reason that the 1975 event was erroneously assumed to be the first march. As far as many of the people involved were aware, it was the first march.

Nevertheless, regardless of the size, it provided a seed from which larger and more organized marches would sprout in later years, and the risk taken by those who participated should be recognized.

Conflicting Memories
It should be noted different people remember things differently. Some witnesses remember a 1974 march that took place in the streets, with a permit, and 400-person contingent riding in cars.

One possible explanation for this discrepancy is that people are confusing the 1974 march with the 1975 event. After the 1975 event, the San Diego Union printed a story reporting that 400 people attended the march. The newspaper had printed no such story in 1974. It was also 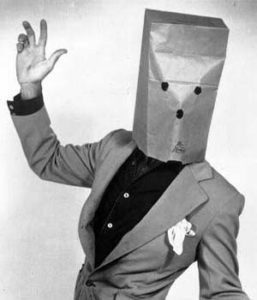 in 1975 that Nicole Murray wrote a column that made reference to a speech he had made that year at the rally which followed the larger, 400-person march.

Of course, without specific records from 1974, it is impossible to be certain whom, if anyone, remembers events with complete accuracy.

The Unknown Gay
One of the most obvious differences between the first few marches and Pride today was that some people who marched wore bags over their heads in a manner similar to the Unknown Comic, a character from The Gong Show. (see photo)

They did this in order to protect themselves. They wanted to march for their rights, yet at the same time were fearful of retaliation.