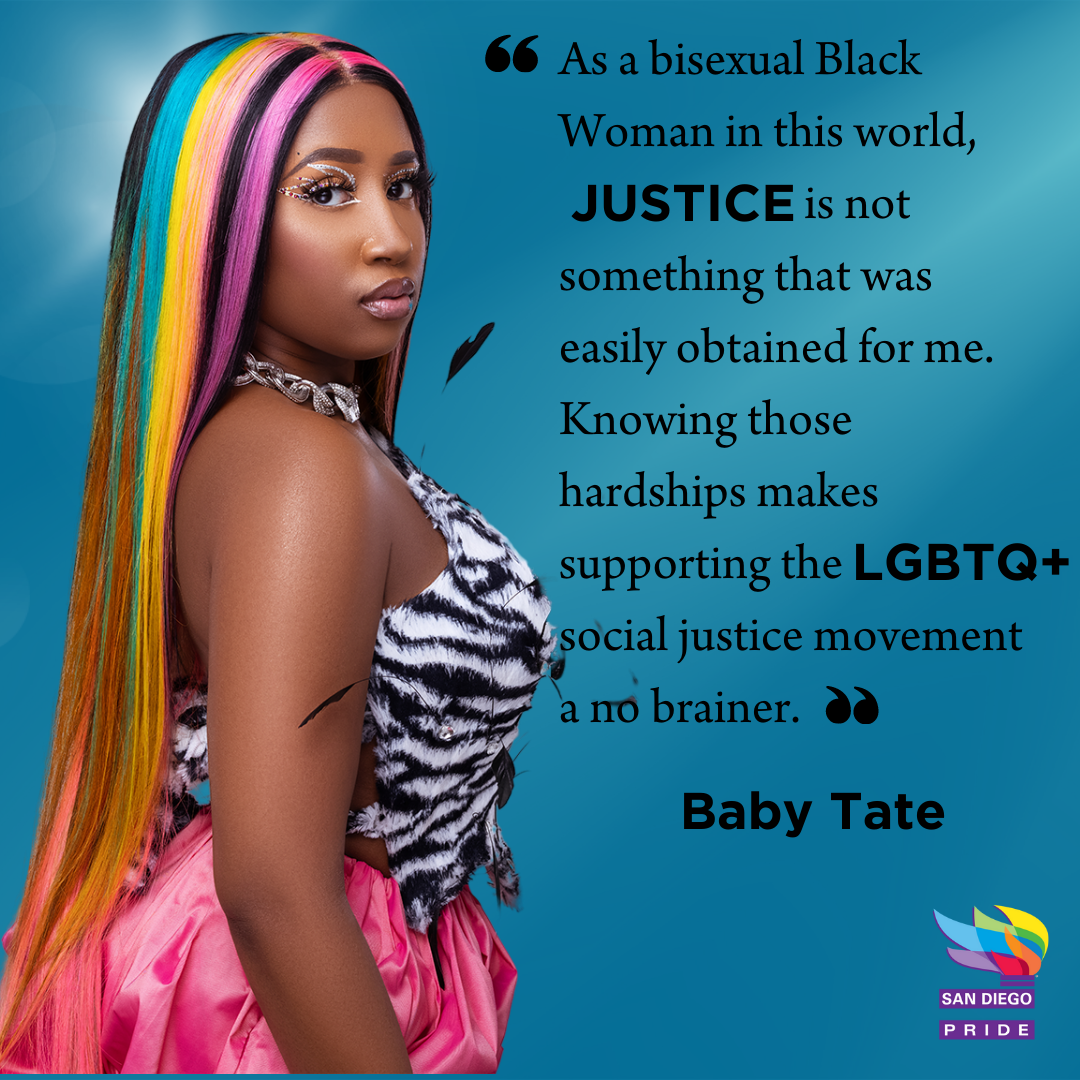 Fueled by self-love and manifested dreams, Baby Tate is forever evolving. The Atlanta-based artist, formerly known as Yung Baby Tate, has a new, concise moniker, but the 25-year-old’s sound remains sprawling. Within a single body of work, you’ll hear summery pop, amorous R&B, and hard-hitting hip-hop. Baby Tate’s debut project, 2015’s ROYGBIV, saw her exercising full creative control as a singer, songwriter, rapper, producer, and engineer—independent skills she’s honed since she was a kid. She’s made concept albums and also unrestrained hits—all the while prioritizing female empowerment and joy, as evidenced by her cohesive, yet varied 2020 EP After the Rain, the home of her viral, confidence-boosting hit “I Am.”

Baby Tate’s debut Warner Records single, “Pedi,” shows off yet another side of her work. While “I Am” was all about uplifting affirmations, “Pedi” lets it be known that she’s not one to play with. Over high-energy production that brings to mind the rowdy sounds of Miami bass of the ’80s and ’90s, she raps playfully but with a hint of intimidation. “I’m a petty-ass bitch, don’t try me.” she raps. “I’ll send a screenshot to your mommy.” For Baby Tate, flipping between these modes is natural—it’s just part of being a fully realized human and her range as an artist.

“When we get into spirituality and positivity and manifestation, people always think, ‘Oh, you have to be 100 percent positive, 100 percent of the time,’” she says. “And that’s so not true.”

Baby Tate has been a chameleon since birth. Born and raised in Decatur, Georgia, her parents are soul singer Dionne Farris and musician/producer David Ryan Harris. Raised by her mother in a single-parent household, Baby Tate was surrounded by music from an early age, stirring up an innate curiosity that turned into an all-consuming passion. Knowing her daughter had talents to be shared, Farris enrolled Baby Tate in a performing arts high school. She was also on her church’s dance team, which became another outlet for her artistry. “Creative expression was always like water or air to me,” she explains. “It was just always there in my life.”

Both her home environment and her extracurricular activities opened the door for Baby Tate to grow professionally and develop techniques that would come into play on her official releases. After dropping ROYGBIV, she took a few years to continue refining her skill set. By 2018, she had locked into constructing sonic worlds through thematic albums, releasing the flirty BOYS EP, followed by her breakthrough project, the freedom-seeking GIRLS, in 2019. With both collections, Baby Tate expanded her musicality and songwriting processes, connecting strongly to women and femme audiences through kaleidoscopic beats and highly relatable lyrics.

In 2020, after more than a decade of cultivating her sound, Baby Tate struck an unavoidable wall: the pandemic. She hit a depressive skid and didn’t feel the motivation to self-produce as she had on previous projects. But a silver lining presented itself: She was finally ready to work with outside talent like producers Take a Daytrip (“Eenie Meenie”) and JetsonMade (“Focused”), who linked with her on After the Rain. Baby Tate says relinquishing control over beat-making gave her space to elevate her songwriting. “It allowed me to take a bit of stress off of myself and just really focus on writing a really good song,” she says. “Because producing and then writing and then recording and then doing background—it’s rewarding, but it’s so much of a process.”

With After the Rain, which received a deluxe release in 2021, Baby Tate shared responsibilities with a team of trusted writers, producers, and engineers, resulting in a chromatic product that sounds both danceable and meditative. Whether rapped or sung, her lyrics feel more vivid and intensely captivating. On stand-outs like “Rainbow Cadillac,” a vibrant flip of Danity Kane’s 2006 “Show Stopper,” Baby Tate puts her personality on full display. Her bubbly, fun-loving disposition shines throughout the project, making her familiar. “People who are fans of me are reflections of me,” she says. “This is why they’re fans of mine: because they see something in me that they see in themselves, or maybe they see something in me that they want to see in themselves.”

Honesty and vulnerability are key elements that form the foundation of Baby Tate’s style. But don’t get it twisted: She’s strong, and she’s here to remind women of all kinds that they are, too. “Female empowerment is really female remind-ment,” she muses. “Because we’re already powerful; let me just remind you of who you are.” Influenced by “strong women” artists like Gwen Stefani, Nicki Minaj, Rihanna, and Missy Elliott, Baby Tate seeks to encourage the next generation of girls who may need help building their confidence and finding their own voices.

A genuine heroine for any person who’s ever faced intrapersonal challenges, the multi-talented artist offers both gentle and assertive reminders that all we need is faith, fortitude, and fearlessness. By being her authentic self at every turn, Baby Tate invites her listeners to do the same. With each release, she provides her fans with potent anthems and inspiring bars, unveiling new facets of her technicolor character in the process. “I’m just a person who wants to stand up and speak out for people that get ignored or are spoken over,” says Baby Tate. “As long as I got these vocal cords pushing, I’m going to keep doing it.”