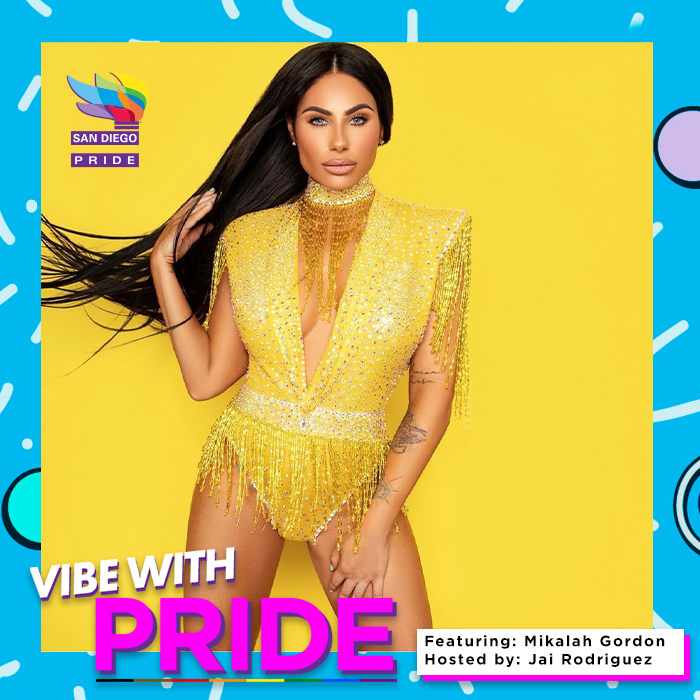 Join San Diego Pride for our series, Vibe with Pride, as we spotlight LGBTQ artists and promote visibility, equality, and empowerment. Hear directly from artists who are keeping the beat going!

For our December Vibe with Pride, host Jai Rodriguez will be in discussion with American Idol Top 12 contestant, Mikalah Gordon, on Thursday, December 16, 2021, at 12 pm!

Mikalah made her entertainment debut as a Top 12 contestant on the hit-show American Idol. Her run on Idol, combined with her powerful voice and unique stage presence, earned her a record deal with famed judge Randy Jackson of Interscope Records.

In addition to her vocal success, Mikalah has made her mark on the comedy community having headlined at The Comedy Store and The Laugh Factory, amongst many others.

Gordon has starred on the CBS hit show “The Unit” as well as the WB sitcom “Living with Fran,” with Fran Drescher.

Additionally, Mikalah has acted as Melania Trump on “Inside Melania” and as the host of “Idolatry”, where she gets to chat with former “American Idol” coaches and contestants.

Mikalah’s can also be seen as the field correspondent for “The Tyra Banks Show” and “The TV Guide Network”, and has served as co-host of “American Idol Extra.”

Most recently, Gordon was a featured resident singer with Post Modern Jukebox in Los Angeles and headlined the 2019 Hollywood Christmas Parade which aired nationally on the CW.

You can catch this soulful chanteuse every Wednesday-Saturday at The Cosmopolitan Of Las Vegas Hotel’s Rose Rabbit Lie, or as the co-host of the Channel Q Morning Show – the first nationally syndicated LGBTQ FM radio station.