Light Up the Cathedral Keynote Speaker 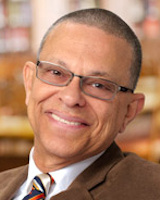 Orlando Espín was born in Cuba, in 1947 and in 1961, his parents sent him to the U.S., to attend school. Espín attended St. John Vianney College Seminary in Miami and then St. Vincent de Paul Regional Seminary in Boynton Beach, where he earned a B.A. degree in contemporary philosophy (1968), a Masters in theological studies (1971) and a Masters in Divinity (1972).

In 1974, he moved to the Dominican Republic and worked as a teacher and pastoral agent.

In his subsequent teaching and writing, he has specialized in the theological study of popular religion, as well as in the theologies of culture and traditioning. He is regarded as one of the founders of U.S. Latino/a theology.

Espín was one of the founding members of the Academy of Catholic Hispanic Theologians of the United States, in 1988, and served twice as its president. He also founded and was the first chief editor of the Journal of Hispanic/Latino Theology.

In 1991, after a few years of teaching at St. Vincent de Paul Regional Seminary and the University of Florida, Espín joined the faculty of the University of San Diego where he is professor of systematic theology in the Department of Theology and Religious Studies. In 1993, at USD, he founded the Center for the Study of Latino/a Catholicism.

Espín is the author of more than four hundred articles published in U.S., Latin American and European journals and the author of several books. He is co-convener of the Latino/a Roundtable of the Center for Lesbian and Gay Studies in Religion and Ministry at the Pacific School of Religion. He is also active in local and national organizations that advocate for Latino/a/x and immigrant rights and equality.

In June 2016, Espín received the John Courtney Murray Award from the Catholic Theological Society of America– Catholic theology’s most important and prestigious recognition. Espín was among the first in his field to write and speak on LGBTQ rights and realities, and has encouraged others to do so. Orlando was co-founder and co-chair of the Latino/a/x Roundtable, a program of Berkeley’s Center for LGBTQ Studies in Religion. He continues to lecture locally, nationally and internationally on Latino/a/x LGBTQ persons, families and religions.

In August 2008, after fifteen years together, Orlando and his partner were legally married in California. As of 2016, they have been together for 23 years.