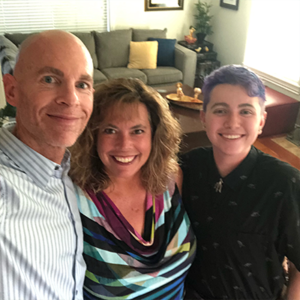 Stonewall Philanthropy: A group, organization, or individual which may or may not identify as lesbian, gay, bisexual, transgender, or queer, but which has diligently raised funds to support the LGBTQ community over an extended period of years and/or has made an exceptional contribution in the past year.

The Burgess Family exemplifies the spirit of the Philanthropy Award because the entire family has given generously of their time, talent, and treasure in some way to support San Diego Pride’s youth programs over the last few years. Shelley and Dave are award-winning educators whose highly respected work focuses on building leadership capacity of teachers and motivating hard-to-reach students.

Together, they run Dave Burgess Consulting, Inc. a company which has authored the New York Times Best-Selling “Teach Like A Pirate: Increase Student Engagement, Boost Your Creativity, and Transform Your Life as an Educator.” Throughout their careers they have been positive change makers and allies to the LGBTQ community publishing books such as “Beyond the Surface of Restorative Practices” and “It’s Okay to say They: Tips for Educator Allies of Transgender and Nonbinary Students.” Their enthusiastic support of San Diego Pride’s Youth programming was inspired by their child’s Fin’s positive engagement and has allowed San Diego Pride to grow the programs available to LGBTQ youth and even sustain virtual programs through the extended pandemic. Their child Fin Burgess (he/they) has worked their way up to become a Youth Ambassador with San Diego Pride and helped so many LGBTQ youth feel safe and validated their identity in their leadership role. Fin has given countless hours of support to youth through the COVID-19 pandemic that are just coming out, facing unsupportive and sometimes abusive family members, or just struggling with school as a Peer Outreach team member.

Moreover, their willingness to openly share their family’s story of love, acceptance, and togetherness with our community through interviews and live streams over the past few years has enabled other families to learn and become more understanding of the struggles of their own LGBTQ children.

The Burgess Family will be honored at the Spirit of Stonewall Rally on Friday, July 16, 2021. Learn more about the rally, the other awardees, and the event here.