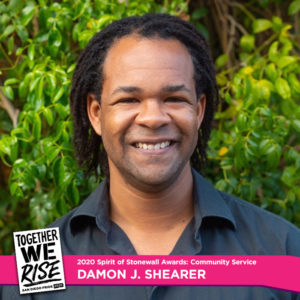 Community Service: An individual who is recognized as an up-and-coming leader within the community or whose contribution to the community in the past year was of particular significance.

Damon J. Shearer has never considered himself an activist, despite his many accomplishments. He was born and raised in Detroit, Michigan, and his journey in civil engagement and activism began when he was a participant in the Detroit Summer Youth Program. Under the tutelage of the late civil rights leader Grace Lee Boggs, Damon learned that everyone has the power to be an agent for change, even with the smallest of actions. Damon took this lesson with him into adulthood.

At Calvin College, he co-founded Unlearn Week, a series of lectures and workshops educating students on anti-racist practices and on challenging institutional racism. While living in Japan, he openly advocated for the destigmatization of same sex marriage and HIV/AIDS statuses and led a LGBTQIA+ peer support group called the Rainbow Club.

Upon moving to San Diego, Damon spent his first few months standing in front of Target stores, Trader Joe’s stores, and other establishments, educating and advocating for the repeal of Prop 8 with the grassroots organization, Canvass for a Cause. His work as a theatre teacher and arts educator has been focused on bringing theatre to communities of color, incarcerated populations, and youth throughout San Diego county.