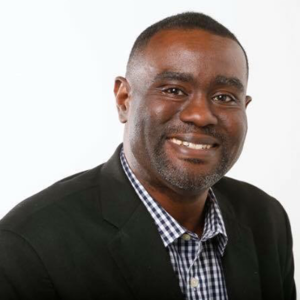 Champion of Pride: An individual who has demonstrated outstanding leadership in the LGBTQ community over an extended period of years with consideration to service to San Diego Pride.

Dwayne is a native San Diegan and lifelong resident of southeastern San Diego. His deep knowledge of San Diego’s neighborhoods and his community activism, which began at the age of thirteen, are invaluable in his role as a nonprofit and community leader. As President & CEO of The Humanity Movement, Dwayne Crenshaw is responsible for the organization’s effective management and operation on a day-to-day basis and leads the teams policy development and advocacy work.

He previously served as CEO and Co-Founder of RISE San Diego from 2014 to 2020, as the executive director of San Diego LGBT Pride from 2011 to 2013 and the Coalition of Neighborhood Councils from 2005 to 2009, where he advanced issues of community development and social justice. From 2000 to 2004, he promoted resident ownership of neighborhood change in southeastern San Diego as the director of community ownership at the Jacobs Center for Neighborhood Innovation. San Diego Metropolitan Magazine has named Dwayne Crenshaw as one of “San Diego’s Smartest Young Professionals – 40 under 40.”

He graduated from San Diego State University in 1994 where he majored in elementary education and was elected student body president of the 35,000-student campus. While working in the state capitol, he completed the coursework for a master’s in government from California State University, Sacramento. In 2011, he received his juris doctorate from California Western School of Law, where he twice earned the highly-coveted Distinguished Advocate recognition.

Dwayne Crenshaw resides in the Encanto community of southeastern San Diego. He is a proud dog dad and the active uncle of five nieces, four nephews, and two great-nieces and enjoys regular dinners with his entire immediate family at his parent’s home.

Dwayne will be honored at the Spirit of Stonewall Rally on Friday, July 16, 2021. Learn more about the rally, the other awardees, and the event here.