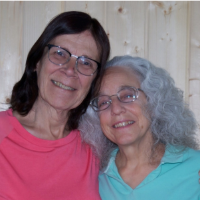 Meredith Vezina and Ellen Holzman have been married for 27 years.

Meredith first became active in San Diego’s LGBTQ community in the 1980s as a volunteer at Lambda Archives. In 1993, Meredith became the first paid director of the gay and lesbian chamber of commerce. In the mid-1990s Ellen and Meredith were on the steering committee of the Alley Cat Ball, an annual AIDS fundraiser produced by the business association.

In 1994, Ellen and Meredith started a small business that kept them wholely engaged until 2014, when they joined the organizing committee for San Diego’s first trans pride march.

Since then, they have been involved with many events in San Diego and online, including: creating Trans Narratives, a Facebook page dedicated to trans visibility; producing videos for Lambda Archives on the local transgender community and filming LGBT events for the archives; researching San Diego transgender history; insisting on inclusion of local transgender history in the city of San Diego’s LGBT historical documentation; providing transgender history for Lillian Faderman’s exhibition on LGBTQ+ San Diego: Stories of Struggles and Triumphs at the San Diego History Center; producing a political debate focused on LGBTQ issues. In 2018, they began supporting LGBTQ immigrants seeking asylum in the United States.

GIVE OUT DAY TOOLKIT