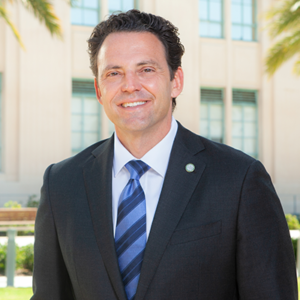 Nathan Fletcher is the Chair of the San Diego County Board of Supervisors. Chair Fletcher is a proud ally to the LGBTQIA+ community and uses his platform as an elected leader to advocate for the rights of the LGBTQIA+ people. While serving in the California State Assembly in 2010, he delivered an impassioned address in support of ending the “Don’t Ask, Don’t Tell” policy, and cast a vote to match his speech. During his first year on the San Diego County Board of Supervisors in 2019, Chair Fletcher initiated Shine Bright with Pride in partnership with the County’s LGBT & Allies Employee Resource Group, a celebratory event to kick off Pride Season. He also led a sizable contingent in that year’s parade — honoring the 50th anniversary of the Stonewall Riots — that marched along the parade route with devout enthusiasm for the LGBTQIA+ community.

Also in 2019, Chair Fletcher joined County employees to fly the Pride Flag at the County offices in Kearny Mesa for National Coming Out Day; and in 2020 they flew the Pride Flag high above the County Administration Center (CAC) for the first time. Chair Fletcher also championed the CAC being lit up for Transgender Day of Remembrance and Visibility and coordinated with the San Diego Convention Center to illuminate the Sails Pavillion in pink, blue and white too. Notably, Chair Fletcher was thrilled to have been a part of LGBTQIA+ history in San Diego as the officiant of the first same-sex ceremony to take place in County Chambers. And most recently, to prevent bias and prejudice for all, Chair Fletcher proposed and executed the creation of the County’s current Human Relations Commission and Office of Equity and Racial Justice.

Nathan will be honored at the Spirit of Stonewall Rally on Friday, July 16, 2021. Learn more about the rally, the other awardees, and the event here.