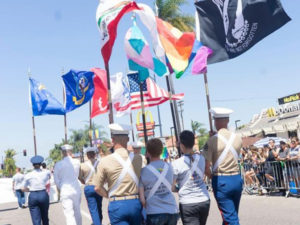 San Diego has the highest concentration of military personnel in the world. This has meant that many of our best and brightest community activists have been and are trans veterans and active duty servicemembers. So much of what we have gained as a community is thanks to the education, advocacy, and visibility work of these local transgender veterans such as Autumn Sandeen and Kristin Beck. In 2015, then active duty trans Marine Corporal Evander Deocariza shared their story publicly, then proudly and openly carried the trans flag in our Parade’s Military Contingent Color Guard.

While our hearts ache for our trans siblings in service coping with this news, we remain committed to continuing to help make visible their lives and struggles. These continued attacks are about so much more than only transgender servicemembers: they diminish, devalue, and dehumanize all trans people, and we as an LGBTQ community must continue to stand united in opposition to this discrimination so that we may all enjoy a legacy of liberation.

My first year as ED

The Art of Our Legacy