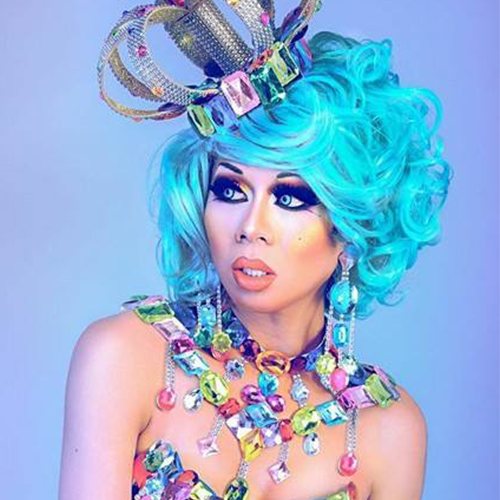 Paris is a California based Drag entertainer, nightlife personality, community activist and business owner. Born and raised in San Diego California, Paris is always proud to boast about the impact the Hillcrest community has had in her upbringing and their important role in who she is today. Her parents used Center Services during her coming out as well as throughout her transition which inspired her to help further their outreach now as an adult. She is a woman who wears many hats in the different aspects of her professional life but all those tend to focus back into one important thing, her love for her community.

As a drag entertainer she is able to combine her talents as a trained dancer with her passion and formal education in fashion design. Her performance style, though fierce, leans towards being light hearted, whimsical, and uplifting, all while dawning elaborate custom made costumes one of which has been worthy of being featured in the San Diego History Museum. In recent years, she has also been given the honor of being a headliner in the San Diego Pride festival with her high production show featuring San Diego based guest entertainers for the True Colors Revue, praised to be a show given with heart.

When off the stage, Paris can be found operating the newest venture of the Mos Universe Group called InsideOUT San Diego. As a business woman, she focuses on creating an inclusive space for the Hillcrest community. Paris believes that InsideOUT as a business is one that gives back as much love as it has been given and that can only be done alongside a team of dedicated, kind and diverse people. She can also be found making her rounds speaking in high schools and colleges as well as government facilities like the City Hall, SDPD/Sheriff’s Department, and the Health Department in San Diego speaking on behalf of the LGBTQ on gender sensitivity, legal rights, and hoping to give a face for understanding, empathy, and dignity.

Eventually when she gets home, she uses her social media presence with the goal of helping anyone and everyone find a way of not feeling or being alone. The brilliance of technology is something to not be wasted so outside of her general platform, she also operates HeyAuntieParis. A simple email account that LGBTQ people have been welcomed to use as a means to connect with someone willing to listen. No judgement, just love.