I Love Being Out 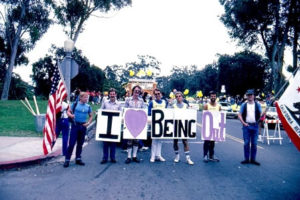 The Pride theme in ’83 was “I Love Being Out.” It was the biggest event to date and featured a number of firsts and milestones. Mayor Roger Hedgecock issued the first city proclamation to commemorate the weekend as the parade grew to include more than 60 contingents and the floats became even more entertaining and intricate, and San Diego was the host city of the Second Annual Pride Coordinators National Conference.

Lambda Pride, Inc.
In many ways, 1983 was a fantastic year for the organization. Lambda Pride applied for and received its non-profit 501c3 status. They hosted a successful national conference in October, with representatives from 18 cities. It was the biggest and most successful event they had had to date. On the surface, everything seemed to be going great.

Behind the scenes, it was a different story. The San Diego Lambda Pride organization began to show signs of the political infighting and strife that would eventually prove to be its downfall. According to Doug Moore, one of the founders of Lambda Pride, the organization suffered from a two-year cycle of highs and lows. Eventually, like a bipolar person suffering with out-of-control rapid cycling, the highs and lows would come more frequently until the organization spun out before the 1988 event.

Parade
The parade continued to expand and grow. More than 60 contingents participated while a crowd of 5,000 people gathered to watch. The float from the West Coast Production Company won the Stonewall Award, continuing its uninterrupted string of winning entries. Two years of stunning floats from WCPC helped raise the bar and encouraged other entries to keep pace. The entry from White Unicorn Gifts was another award winner with a float just as intricate as WCPC’s.

Festival
The festival was again held on Hancock Street at the WCPC parking lot. Special guest, comedian Robin Tyler, made the crowd laugh, while a variety of singing and dancing acts provided other entertainment. Dancing, exhibits, food and games rounded out the entertainment options which took place in the crowded and popular dirt parking lot. The most surprising milestone was perhaps the proclamation from the city that was read at the festival.

A Proclamation
It was the first time in Pride’s history that the office of the Mayor issued a proclamation for Pride. The only catch was that it wasn’t exactly what Pride had asked for; instead of a proclamation for Gay Pride Day, it was a Human Rights Day proclamation. It was still a cause for celebration, though, because it was the first positive step forward from City Hall. What might be most surprising to younger residents and later transplants is that it came from then-Mayor Roger Hedgecock.

Republican Mayor Roger Hedgecock had campaigned as a progressive Republican and was considered to be relatively kindly disposed towards the gay community. The historic proclamation for Human Rights Day paved the way for subsequent proclamations from other politicians and municipalities. Ten years later, by then a more-conservative talk show host, Hedgecock would lead a legal battle attempting to force Pride to allow an anti-gay “Normal People” contingent to march in the parade.

Going National
Lambda Pride also hosted the Pride Coordinators National Conference in October. It was the second year for the organization that would eventually become the international pride organization now known as Interpride. The first conference had taken place the previous year and was organized by Marsha Levine, with the help of a contact list from Lambda Pride chairperson Doug Moore. The 1983 conference included more than 60 people from 18 cities.