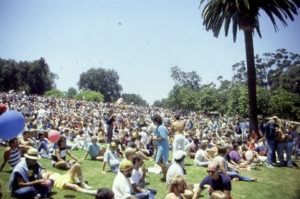 The New Lambda Pride
After the fallout of the 1986 Pride–and based on Lambda Pride’s inability to put on a festival, coupled with a highly successful festival put together by an ad-hoc group–the existing Lambda Pride was essentially dead in the water. The festival was then, and remains today, the major source of fundraising for Pride. In the weeks following the ’86 event, columns and editorials in the local papers called for a changing of the guard within Lambda Pride.
With Lambda Pride’s bank accounts drained and the festival committee fresh from a successful event and sitting on more than an $8,000 surplus, it appeared to many that it was time for a change. A new Board of Directors took the helm, led by Tony Zampella, publisher of San Diego Scene and Bravo, who agreed to cover the debt left behind by the previous board.

Zampella was young and optimistic, and, as President, he wanted to make Lambda Pride a huge success. Looking back, he admits that he had the greatest intentions but lacked some of the skills to exact his vision. “I got a little bit badgered for that, and rightly so, I should have been a little more astute in those areas,” said Zampella.

Zampella was joined on the board by Mark Gabrish Conlan, Gordon Miner, Roger Dennehy, Lisa Rodriguez, and “Big” John Pfingsten a Lambda Pride veteran who served as Vice-President. This new Board was energized to make the event a big success. To emphasize the changes on the board and the new direction, the organization billed itself as “The NEW Lambda Pride” and the theme that year was “Making History.”

Although the New Lambda Pride would fall short of Zampella’s own expectations and hopes, it was a year when many significant events took place. The Mayor marched in the parade, a tearful protest over AIDS funding marched on City Hall and Lambda pride hired its first paid staff member, Lisa Carruthers, who was sort of a prototype for later Executive Directors.

Mayor O’Connor Marches in Parade
The parade took a similar route as in past years, heading north from the park to Robinson, and then back south to the site of the rally in Balboa Park. Chris Kehoe and Craig Morgan were honored as Grand Marshals. Attendance for the event reached 8,000 spectators. The ever-present fundies were there again as usual, and a plane flew over the city trailing a message which read “Homos deserve AIDS says Owens’ church.”

The biggest milestone for the parade that year was the participation of newly elected mayor, Maureen O’Connor. O’Connor’s support for the community went back as far as 1975 when the then-City Councilwoman sent a telegram of support to the organizers of that year’s parade. During her election campaign, O’Connor committed to walking in the Pride Parade if she won the election. This naturally endeared the Democratic candidate to the community that campaigned vigorously for her to win.
Mayor O’Connor’s presence at the parade may have had something to do with the return of a police presence that was willing to work with Pride. The fiasco the previous year, in which some of the most homophobic police officers refused to work with Pride to maintain a buffer zone between parade participants and the fundies, resulted in violence. The presence of the mayor walking in the parade probably encouraged the police force to maintain the peace between Pride and the fundies.

The Rally Becomes a March on City Hall
After the parade, contingents and spectators alike were told to proceed directly to the rally site. There, they were greeted with the sight of 289 Styrofoam crosses, stars, and hearts decorated with black ribbons and purple orchids surrounding the front of the stage. At the rally, the crowd was told that these symbols represented the 289 San Diegans who had died of AIDS. Speakers at the rally, including Rick Anderson, Nicole Murray and Gloria Johnson attacked the city of San Diego for the lack of funding for AIDS programs.
The speakers rallied the crowd to take up the symbols of those who had lost the fight against AIDS and to march downtown and lay them on the steps of City Hall. Nicole Murray (now Murray-Ramirez) recalls giving a particularly moving speech. Many believed that the people at the rally would be unwilling to march downtown after already marching in a parade and lose out on the fun to be had at the festival.

The naysayers were proven wrong as 3,000 people joined Anderson, Johnson, and Murray in a 17-block march on City Hall. The marchers carried a banner which simply read, “We have waited too long, we have lost too many.”

The symbols of the AIDS victims were laid on the steps of City Hall and more speeches were made demanding that the city address the problem. Tears were abundant as people remembered lost loved ones. It was an emotional and visible display by a community which had “lost too many” and was demanding action and funding from the city.

The End… of Lambda Pride
The “New” Lambda Pride ultimately only lasted one year. It fell victim to the infighting, backstabbing, personality conflicts and personal agendas that had plagued Lambda Pride since its inception. Zampella, who now lives in Provincetown, looks back on his time with Pride and is proud of what was accomplished that year, but admits that he was young and probably stepped on a few toes along the way.

In the end, in the face of much criticism from certain community activists and news outlets, the Board of Directors announced the end of Lambda Pride. The corporation was dissolved and its assets were dispersed.