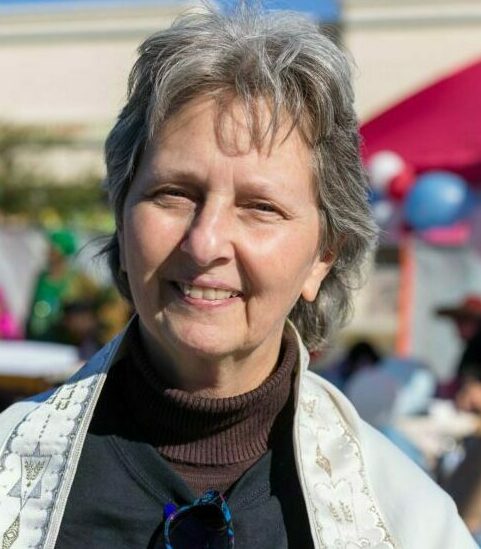 Andrea Beth is a Jewish, senior, cisgender, lesbian, woman, originally from New York. A feminist from the late 1970’s, she was President of the Atlantic City chapter of the National Organization for Women which gave her the tools she needed to address internalized homophobia. She came out as a lesbian a few years later. Andrea Beth grew up in an unobservant Jewish home; having worked through internalized misogyny and homophobia helped her shed internalized antisemitism, when she “came out” as a Jew at age 30. Since then, she has embarked on a lifelong journey of Jewish learning, practice, teaching, activism, and leadership.

Since moving to San Diego in 1997, Andrea Beth has co-led Shabbat (Saturday morning) services with Chavurah Shir Ha-Yam, a Jewish Renewal Community, and High Holy Day services with Kol Haneshama, a Reform community. She has been a faith leader with DevOUT in previous Pride events, providing a Jewish voice and presence for Light up the Cathedral, leading the Pride parade with brother and sister faith leaders, and being present at events to oppose the “conversion therapy” conference that was held in San Diego.

Andrea Beth is currently serving her second term as Chair of La Mesa’s Environmental Sustainability Commission. She lives in La Mesa with her wife and partner of 20 years. She is excited to become Co-Chair of San Diego Pride’s DevOut LGBTQ Interfaith Coalition and looks forward to building relationships with other LGBTQ-affirming faith leaders.