These days Carla Coshow is best known as a Realtor, operating in the greater “gayborhood” area and beyond. In the 1980s, however, Carla Coshow, was probably best known in the community for being the co-owner of The Flame and for her community activism, including her participation in Lambda Pride.

When Doug Moore wanted to form Lambda Pride in order to give the community a solid organization, Carla got on board and joined the Board of Directors. They worked hard to get Pride organized and on a sound financial footing, and even filed the necessary paperwork to incorporate and become a 501(c)3 non-profit corporation. Despite some of the wonderful people on the Board, there were often personality clashes, a problem that would plague Lambda Pride for its entire existence. 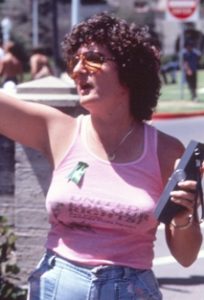 As with any kind of group effort, some people would end up doing more of the work than others, while others clashed over personality issues. Even people who had the same vision might have different ideas on the best way to go about making it happen. Carla and Doug regularly tangled. “If I didn’t hang up on Doug Moore at least once a week,” explained Carla, “then we hadn’t spoken.”

In 1981, Lambda Pride held the first festival on Juniper Street between Fifth and Sixth Avenues. It was small compared to the events that would take place decades later, but it featured a dunking booth, booths from some organizations, and food. They were not permitted to sell beer, so beer was donated and given away free to those attending. It was a major milestone, but because they weren’t allowed to restrict access to the event, they couldn’t sell tickets or beer, and that resulted in lost potential revenue.

The following year, the event was moved to the parking lot of the West Coast Production Company, or WCPC, as it was known. This allowed them to sell liquor, charge an entry fee and keep homophobes off the grounds.

Although no longer involved in the planning of the event, Carla still enjoys attending each year. In the beginning, she was a big fan of the parade and march because of the visibility, but these days she’s more a fan of the festival, which she sees as an opportunity to see and catch up with old friends.