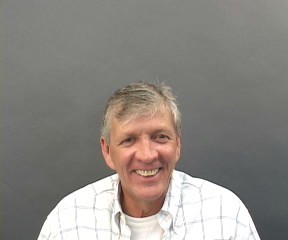 Today most people know Chris Shaw as the owner of Urban Mo’s and Baja Betty’s, but what many people don’t know is his history with San Diego Pride. Although he has never held any official position with Pride, whether on the Board of Directors or on staff, without his kindness, commitment to community and generosity, San Diego Pride wouldn’t be where it is today. In fact, San Diego Pride may not have made it out of the 1980’s if not for Chris Shaw.

Back in the early days of Pride, years before Hamburger Mary’s/ Urban Mo’s or Baja Betty’s, Chris Shaw was the owner of the West Coast Production Company, or simply WCPC. Located near the airport on Hancock Street, WCPC was THE place to be. It was the Urban Mo’s, Rich’s, Numbers, The Flame, and Bourbon Street of its day, all rolled into one. It was the place to see and be seen in the late ‘70’s and ‘80’s. 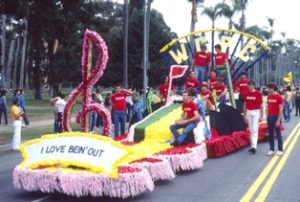 One way in which Shaw and WCPC had an impact on Pride was their participation in the parades. WCPC was one of the first parade entries to feature professionally built floats. Every year, WCPC was one of the best entries in the parade, which raised the bar for other entries and encouraged them to step up their game. Pride’s ultimate success has in large part been based on the parade becoming a destination event where people can see elaborate floats, and not just the standard fare of flatbed trucks with rainbow streamers.

Chris Shaw also came to Pride’s rescue a number of times and he was someone the organization could always depend upon in times of need. If Pride needed to hold a fundraiser or wanted to distribute flyers, the answer was yes. When Lambda Pride held the first-ever festival on Juniper Street and they ran out of beer, Shaw provided additional kegs from WCPC.

One of the most amazing examples of his dedication to Pride came in 1986 when Lambda Pride announced only weeks before the event that they were going to cancel the festival. Despite previous claims that the festival was going to be the biggest ever, Lambda Pride was effectively broke. They didn’t have the money to put on the event, let alone to pay for the $1 million insurance policy required by new regulations.

Lambda Pride may have canceled the event, but the public wanted their Pride party. At a town hall meeting at The Flame to discuss the viability of an ad hoc group putting a festival together, Chris Shaw asked David Manley if he would spearhead the effort. Manley agreed and Chris told the crowd that David Manley, with his experience putting on previous festivals, had volunteered to take charge of the effort.

A few days later, when the community met at WCPC to clean up the parking lot and the adjacent lots to prepare for the festival, Shaw told Manley that it would take some money to get the project off the ground, so he gave Manley a check for $5,000 on the spot.

The festival was a success and Manley and the festival organizers were able to repay the loan, but that doesn’t take away from the fact that Chris Shaw was willing to put his own money on the line in order to make such an important community event happen.