Exuberant, upbeat, kind, giving and selfless are the words which best sum up David Manley. He’s the type of person who is not only willing to take on a monumental task, but he makes others want to help out as well. A native Californian and Disney fan, he left home for Florida, where he realized his dream of working at Disney World. Eventually, he made his way back home and landed in San Diego, after a short detour in the military. 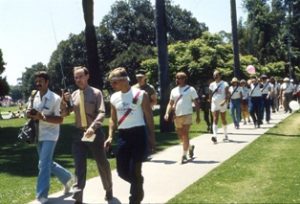 Here in San Diego, he attended a Lambda Pride planning meeting and he was encouraged to become involved in Lambda Pride by Doug Moore. He spent a couple years with Pride and in that time he was involved in the planning of the festival, a skill that would become important again later, and he was one of the organizers of the Fundy Fighters.

one of the biggest challenges facing Pride was the rise of the fundamentalist anti-gay protesters, known as the “fundies.” In the ‘80s, they numbered in the hundreds and would take up many city blocks holding hate-filled signs and shouting hateful things at the parade participants. David was one of the many people who helped organize the “Future Former Fundy Fighters,” a group of volunteers who would stand in the street between the fundies and the parade and provide a human buffer zone. 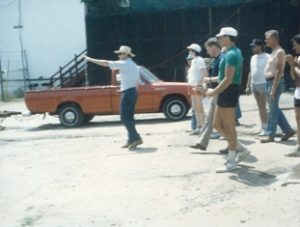 After a couple years, David left Pride, but he was called back into service in 1986 when he was drafted by the community to make the festival happen. Lambda Pride, after initially promising a gargantuan festival, later canceled it altogether. The community was incensed and held a town hall meeting at The Flame to decide what should be done.

There, David was nominated to lead an  ad-hoc committee to organize a festival in the two short weekends that were left before Pride. He began furiously making plans, took some time off work, and began to spread the word about what needed to be done. The following Saturday, people showed up to help prepare the dirt parking lot for the festival. Weeds were pulled, gravel was shoveled, dirt was swept, pallets were moved, and trash was taken to the dump.

In the end, with a lot of help from a community of dedicated volunteers, David and the committee were able to get the site ready for the first two-day festival. It was an enormous success (by the standards of the day) and they netted a profit of $8,764.81 after the books were closed.

These days, David is not involved with Pride, but every year he sets up a little space along the parade route he calls “Zippity Dave’s Garden Spot,” which is kind of the Pride version of a tailgate party.