Help us queer the vote? 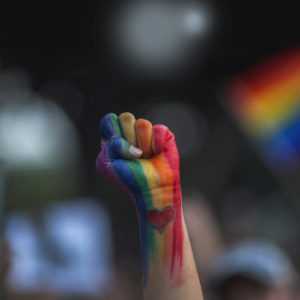 Ten years ago the LGBTQ community in California was deep in the fight to preserve our right to legally marry. Those of us who had been in that fight for years can recall an odd dichotomy. Shortly before we won the right to marry through a court victory earlier in 2008, many in our own community had told us we were fighting for “too much, too soon,” and after that court victory, we again heard from many in our own community that “We can’t lose. This is California.” Either way, it was always a challenge to get our community and our allies to engage in the fight. Of course, we know how this turned out. It would be five years until the right to marry was restored in California.

In 2008, only around 9,000 individual people volunteered their time on the Prop 8 campaign throughout the course of the year. Yet, after we lost Prop 8, almost 30,000 people took to the streets in San Diego in protest. Each year, around 5,000 people from a multitude of organizations volunteer to put on San Diego Pride which boasts over a quarter million people celebrating in the streets of our beautiful city. We know our community is large and diverse, and it’s vital that if we want a democratic system that works for our community then we must do more than just show up at the polls or to the protest; we need to actively engage in the system.

Right now, San Diego Pride is working with our partners at The San Diego LGBTQ Community Center on our Vote with Pride program where we ask our community to volunteer its time in non-partisan voter engagement efforts, working to ensure that LGBTQ people and our supporters show up to the polls. Whether you engage with our GOTV efforts or another, we hope you will stay active in the democratic process. We’ve seen repeatedly how easy it is for our gains to be taken away, and we know how important it is to stay in this fight. If we all lean into this struggle together, we will Persist with Pride.

HIV/AIDS, the legacy and the fight