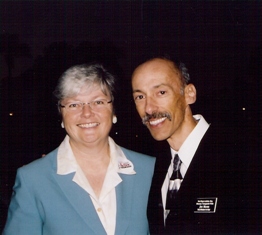 Joe Mayer’s involvement with Pride began in 1989 when members of the community wanted to organize that year’s Pride event and they approached the Center to ask for funding. It was the 20th anniversary of the Stonewall riots, and it would be the 15th annual* San Diego Pride, so the group was calling itself the 15/20 committee. The previous year’s event ended up $40,000 in debt, and prior to that Lambda Pride had experienced years of financial ups and downs, so investing in a Pride event was a risk for the Center. However, the people involved, including Chris Kehoe, Neil Good, Jeri Dilno, and the rest, were trustworthy people and they had a plan.

Joe Mayer was the Treasurer at the Center at the time so when the Center’s Executive Director, Scott Fulkerson, brought the proposal to the board, Joe was asked what he thought. His response was that it could definitely work, as long as the Center had control of the money and control of the spending. The plan was approved, with some strings attached, and Pride became a committee of the Center, with three people from the Center sitting on the committee, including Joe, who also became the Treasurer for Pride. 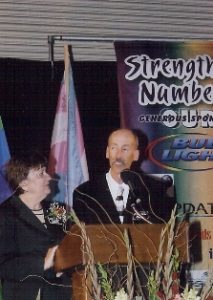 His organizational skills and his adherence to accepted accounting practices helped the Pride committee plan out a realistic budget and then stay within that budget. The event was a huge success, and the committee made a profit of $20,000 that year. This proved that San Diego Pride could be a fiscally responsible organization. The 15/20 committee decided to become a permanent organization and became San Diego Lesbian and Gay Pride.

He has many memories of his time with Pride, but one that sticks out the most was the year that Pride was almost rained out. It was 1990, only a year after the organization had formed, and it had been pouring all night. After a midnight phone call from Tim Williams, Joe spent the remainder of the night repairing damage that the storm had done to the festival grounds. The next morning, with the parade scheduled for noon and the rain still coming down, he and the other committee members were beginning to despair. 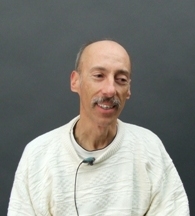 Then, only minutes before the Parade started, the skies cleared, and the rain stopped. The Parade started on time, and people still attended the festival, but the earlier rains had definitely had an effect on the number of people attending the events that year. As a result, the committee would change the date the following year to July in order to avoid “June gloom.”

Joe Mayer served on the Committee and later on the Board of Directors, when Pride separated from the Center in 1994, for 17 years before stepping down in 2005. He helped lay the foundation for many of the policies Pride follows today, and his attention to financial details was a large part of what helped Pride get off the ground in the early years of the organization.