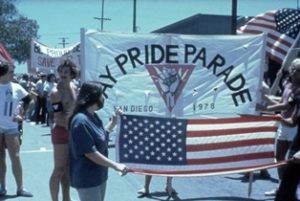 John Keasler became involved with Pride at a key point in our history. In 1978, California State Senator John Briggs was championing the anti-gay Proposition 6 that would have made it illegal for gay people to teach in public schools. The proposition had come in the wake of a wave of national anti-gay sentiment generated by Anita Bryant in Florida the year before. Initial polls indicated that it would pass by a 2-1 margin.

Members of the San Diego gay and lesbian community formed the Save Our Teachers organization, which was part of a statewide “No on 6” movement. In those days, Pride was organized by different ad-hoc committees each year and, in 1978, Save Our Teachers was responsible for the event. John was selected to be one of the Co-Chairs of the committee and it fell on him to go to the police station to request the parade permit for the march.

The direct threat Prop. 6 posed was responsible for mobilizing record numbers of the community to work against it. That year, the Pride theme was “Save Our Teachers” and hundreds of people marched to show their opposition to the proposition. The rally took place at the intersection of Sixth and Juniper and the defeat of the “Briggs Amendment” dominated the speeches that day. 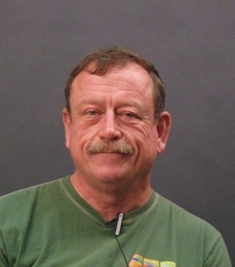 people who tried to claim that the event was canceled because they objected to the participation of the Socialist Worker’s Party. John recalls that there was also some objection to Pride being organized by a committee that involved a number of women. Nevertheless, the event took place despite the best efforts of its opponents.

In the end, Proposition 6 was defeated by a wide margin thanks to a statewide push from a united community and its allies. One surprising ally came from former Governor Ronald Reagan who spoke out against the passage of the initiative.

In the years since John Keasler has remained involved in Pride to varying degrees. He continued to march for a number of years, and these days he organizes the “Art of Pride” display at the festival each year, which features artwork with an LGBT  theme.