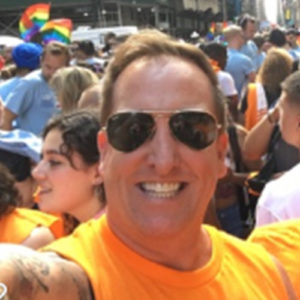 Stonewall Philanthropy Award: A group or organization which may or may not identify as lesbian, gay, bisexual, or transgender, but which has diligently raised funds to support the LGBT community over an extended period of years and/or has made an exceptional contribution in the past year.

John Ealy is the owner of a restaurant group that includes a local San Diego restaurant in Mission Hills, Harley Gray Kitchen & Bar. A large part of his intention with opening Harley Gray was to be a bigger participant and influence in the community and particularly in the LGBTQ community of which he is a proud member. Philanthropy and giving back have been a part of his personal and business life from the beginning when he opened his first restaurant at the age of 24.

For 20 years he has been an active member and advocate of The Trevor Project, almost from its inception. He has served on the Board of Development and has hosted large fundraising events at the restaurant/nightclub that he owned downtown. He has marched with the Trevor Project in Los Angeles Pride, San Diego Pride, and New York Pride for years, and he has attended the organization’s annual gala in Los Angeles for 21 consecutive years.

Locally, he has been a continuous participant of the Rob Benzon Foundation and is a proud sponsor and donor for the San Diego Gay Men’s Chorus, the Thanksgiving Feast at the Center, and Tantrums & Tiaras. His business has sponsored its own San Diego Flag Football team, the Harley Grayhounds and has been a very proud, annual participant in Dining Out for Life and the San Diego AIDS Walk. Ealy was awarded the annual Red Hot Heroes Leadership Award by the Mission Hills Business Improvement District (MHBID) for co-founding and hosting the annual dinner and fundraiser that benefited the MHBID and the San Diego Fire Department’s Fire station 8 in Mission Hills.

With pride, he initiated an annual donation of over 40 Padres tickets for Out of the Park and for the Gay Youth department at the Center. Last year, he matched a single-day donation for up to $10,000 to hire staff members for and to help the Center in rewarding ways. Recently in the face of the pandemic, Harley Gray Kitchen & Bar donated meals to the entire ER department at Scripps Hospital and to local industry workers in the community.

John Ealy will be honored at the virtual Spirit of Stonewall Rally on Friday, July 17. Learn more about the rally, the other awardees, and the virtual event here.