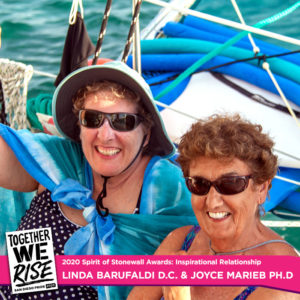 Inspirational Relationship: A friendship, familial bond, or intimate relationship whose love, strength, work, and commitment to LGBTQ equality embodies the humanity of our community.

Joyce and Linda were born a block and a half from each other in a small town in Western Massachusetts. While friends, their eight year age difference kept them in different circles until they were both graduate students in theology/philosophy in Boston. By then, their ages made much less difference, and they fell in love.

Both had worked separately and continued to work together politically regarding civil rights, the peace movement, Second Wave feminism, LGBTQ issues, poverty, electoral politics, anti-racism education, and environmental, and immigration issues. They have never met a fight for justice they didn’t like.

Soon after moving to San Diego, they opened the Amazon Sweet Shop, a political activism cell masquerading as an ice cream store (although the ice cream was delicious and healthy as well). Eventually, Linda became a chiropractor and practiced in Hillcrest for nearly 20 years, then worked at The San Diego LGBT Center. Joyce served on the Stepping Stone Board during the period of the capital campaign and the building of the new, recovery home. She then became CEO of GSDBA, the gay and lesbian chamber of commerce and, in ten years, built the organization both in membership and in financial stability. In her view, economic growth and civil rights go hand in hand. “Money is power, and power used for the good results in equality.”

They were married in 2008 and are currently enjoying their 48th year of relationship. Since retiring, they have continued to support the community financially and by demonstrating, phone banking, and communicating with elected officials to advocate for justice for all, especially for the underserved. With Dr. Jennifer Rycenga, Linda edited The Mary Daly Reader, published by NYU Press, an anthology of the work of groundbreaking feminist philosopher who had been her friend and mentor.

They feel very lucky to have a happy relationship and a shared commitment to action based on their common values.

Joyce and Linda will be honored at the virtual Spirit of Stonewall Rally on Friday, July 17. Learn more about the rally, the awardees, and the virtual event here.