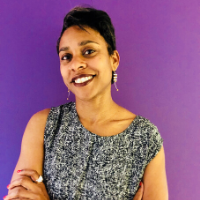 Kierra Johnson has a wealth of experience in program development, youth leadership and reproductive justice. Recognized as a national expert, Johnson has testified in front of the U.S. House of Representatives and has increased visibility of reproductive justice through her appearances in Newsweek, The New York Times, Fox News, Feministing.com and National Public Radio.

Johnson previously served on the National LGBTQ Task Force’s board of directors and on its National Action Council and has keynoted at the organization’s annual Creating Change Conference. Johnson leaves a ten-year tenure as Executive Director at URGE, where she oversaw an organization-wide rebrand, expanded programs, strengthened the model for engaging young people in action and quadrupled the size of the organization. Prior to becoming URGE’s Executive Director, Johnson was the organization’s Development Director and Field Director. She has served on the boards of Groundswell, Center for Community Change and at the Women’s Information Network (WIN). Johnson has been recognized for her leadership with awards including the Young Women of Achievement Award for WIN in 2002, the Women of Vision Award for the Ms. Foundation for Women in 2013, and Washingtonian Magazine’s Most Influential Washingtonians Under 40 in 2009.

When appointed as the Task Force’s Deputy Executive Director in September 2017, Kierra Johnson said, “Dignity, liberation, joy, freedom, love and resistance are just a few of the words that I associate with the National LGBTQ Task Force. As a bisexual woman I am no stranger to being made invisible, advised to tone down, or trained in the art of the code switch. As a queer southern mom, it is no surprise why I would be drawn to an organization that touts the tagline ‘Be You.’ In these cultural and political times, it is an act of resistance to live out loud and to lead and love with our full identities. I am excited to join the Task Force as the Deputy Executive Director. I welcome the opportunity to think strategically with a powerful team of leaders and be in service to those who are working to ensure that LGBTQ people – especially the most targeted among us – not only survive but thrive. I can’t wait to roll up my sleeves and dive in to continue the ongoing and creative work of the Task Force to change hearts and minds, behavior and policies so that justice is no longer a vision but a reality for all!”