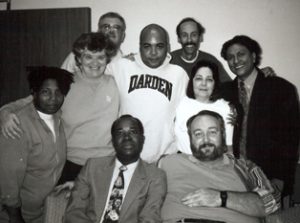 Larry Baza joined the Pride committee after being asked to do so by Co-Chair Christine Kehoe. The 15/20 committee had just pulled off a successful Pride event in 1989 and proven that they were on the right track after the turbulent years in the 1980s. His addition to the Pride committee provided someone with a long history of involvement in civil rights movements and someone who had experience with community fundraising.

Larry’s first year on the board would prove to be a trial by fire–or rather by rain–and it would also be a pivotal moment for the organization. In 1990, rain literally threatened to make Pride a washout. That year, after the festival had already been devastated the night before by high winds and rain, the Pride committee was nervous as it continued to rain as the time to start the parade approached. Then, minutes before the parade was supposed to start, the rain let up and the parade rolled on time.

Despite the rain, Pride only ended up a tiny amount in the red, but it encouraged the Board to change the date of San Diego Pride. In the early years after the Stonewall riots, it was assumed that all Pride events had to take place in June, which created a problem for cities in Southern California, as they all tried to plan events which wouldn’t compete with another regional city on the same date. Long Beach had already moved to May, so the weather disaster in 1990 encouraged San Diego Pride to move their event to mid-late July. The better weather and lack of competition with other Pride dates helped San Diego Pride become a destination event for Californians across the state. 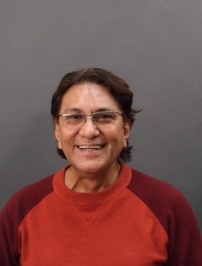 In 1992 Larry Baza became Co-Chair of the Pride committee along with Vertez Burks. It was a remarkable time because for the first time Pride was headed up by two people of color. Historically, few non-Caucasians had participated in the Pride organization, and there was even a lack of interest in attending the events. Baza and Burks and the committee members at the time helped change that. They made a concerted effort to make Pride a place for people of any color or ethnic background, and for couples and parents, as well as the single members of the community.

During his time with the organization, San Diego Pride became a more inclusive organization, one that reached out to all members of our community. San Diego Pride became a destination event for LGBT people from across the state and beyond. The influx of money from outside our own community was instrumental in making Pride a financial success which could give money back to the community.

These days Larry and his partner Tom Noel own Noel-Baza art studio in San Diego’s Little Italy neighborhood. He is still an ardent supporter of Pride and the LGBT community and he remains proud of all that Pride has accomplished since he attended his first Pride in the 1970s.