Spirit of Stonewall Award – Inspirational Couple
Awarded to a couple whose love and commitment embodies the humanity of our community. 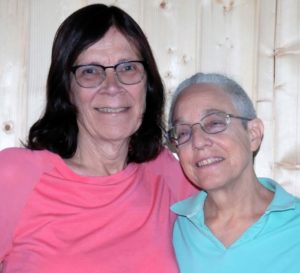 Meredith Vezina and Ellen Holzman have been a couple since 1992 and were legally married in 2013. Meredith also became a publicly visible trans woman in 2013, and the couple has since promoted transgender visibility, primarily through events and videography.

Meredith became active in the transgender community in the 1980s as a volunteer for the Lambda Archives of San Diego. In 1993, she became the first paid director of the Greater San Diego Business Association and advocated for the organization to openly identify as the Gay and Lesbian Chamber of Commerce.

Since 2014, Meredith and Ellen have focused on their campaign for trans visibility and respect by being part of the committee that organized the first Trans March and Rally, founding Trans Elders of San Diego, founding and producing The Trans Oral History Project and the transgender collection for the Lambda Archives. In 2015, they founded Trans Narratives to document and affirm the lives of local trans people and local trans history. They also worked with LGBT Weekly to adopt a policy banning hate speech and personal attacks from its comment pages.

In 2016, they insisted that the city of San Diego include trans history in its San Diego Citywide LGBTQ Historic Context Statement and provided information on trans history dating back to 1936 that is now a part of that document. They also helped the LGBT Center include trans people in the video campaign for an LGBT-affirming housing project. This year, they have joined the organizing committee for the local LGBTQ Equality March held in June of 2017.