What can be said about Nicole Murray-Ramirez that hasn’t been said already? This long-time member of the San Diego LGBT community has never steered away from controversy and has never shied away from giving his opinion. As a result, where Nicole is concerned, there is often no middle ground. People often either love him or hate him, and oftentimes they can do both within a single sentence. However, regardless of their personal opinions of him, nobody can accuse him of not being a proud member of the community or promoting pride in others.

In the 1970s, he was an outspoken opponent of both Anita Bryant and John Briggs. In 1977, former beauty queen and orange-juice spokeswoman Anita Bryant launched an anti-gay movement that spread across the country. The following year, California State Senator John Briggs supported Proposition 6, which would have made it illegal for homosexuals to teach in public schools. Despite their anti-gay stances, Nicole feels that they should be credited for uniting a previously fractured gay and lesbian community.

In the 1980s, when the AIDS crisis was devastating the community, Nicole was one of the most outspoken critics of the city’s lack of leadership on the issue. In 1987, he convinced the Pride Board to allow him to speak at the rally and make an appeal to the crowd for a march on city hall to protest the city’s lack of funding for HIV/AIDS programs. Although there was some doubt about whether people who had just participated in a march would be willing to march again, the plan was approved. 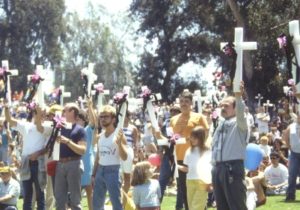 At the rally after the parade, people were greeted by the sight of 289 Styrofoam crosses, stars, crescents and hearts, wrapped in black ribbon and adorned with purple orchids, lining the front of the stage. There, Nicole told those assembled that the 289 symbols represented the San Diego residents who had died of AIDS. He told the crowd that it was past time for the city of San Diego to fund AIDS programs. He implored the crowd to take up the symbols lying in front of the stage, march downtown, and lay them upon the steps of city hall.
The organizers were nervous. They were gambling that people would want to march another mile or two further after just completing the parade but more than 3,000 people answered the call to march downtown. They carried a banner which read, “We have waited too long, we have lost too many” and when they arrived at city hall, the 289 symbols were laid on the steps. It was a momentous occasion and there was a huge outpouring of emotion as people thought of departed friends and loved ones.

Nicole has also been often honored in the Pride marches and parades, often serving as Grand Marshal or another place of honor in the parade and in 1994 received a Lifetime Achievement award for his contributions to Pride. Additionally, he can often be seen at one of the reviewing stands, announcing the passing parade contingents to the crowd.