Spirit of Stonewall Award – Community Grand Marshal
Awarded to an individual or couple who has demonstrated outstanding leadership in the LGBT community over an extended period of years with consideration to service to San Diego Pride. 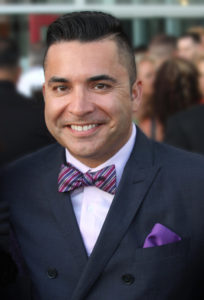 Russell Roybal is a noted fund-raiser and LGBTQ movement leader. He worked with the Gill Foundation for over six years and served as the director of training and capacity building, teaching thousands of LGBTQ and allied activists and leaders, around the country, how to resource their organizations. Russell also served on the staffs of The National Latina/o LGBT Organization, the San Diego LGBT Center, and San Diego Pride. He attended San Diego State University where he majored in Chicana/o Studies and was active on campus and in the local LGBTQ and Chicana/o communities. He is also a graduate of the Chicano Federation of San Diego County’s Leadership Institute.

He has served in various leadership capacities for several nonprofit organizations, both locally and nationally. He has served as chair of the Grassroots Institute for Fundraising Training, and as a board member of the National Committee for Responsive Philanthropy, Gay and Lesbian Latinos con Orgullo, and the Imperial Court in San Diego. Russell now serves on the board of the International Imperial Court System.

Russell is the recipient of numerous awards including the League of United Latin American Citizens (LULAC) first-ever Equality Award. He was also recently named a 2017 Pride Honoree by the CA LGBT Legislative Caucus.

His activism is rooted in his family’s tradition of public service and pursuit of social justice. Russell grew up in La Puente, CA, but his chosen home is San Diego. He currently resides in Washington, DC. Later this summer Russell will return to the Golden State to serve in a senior leadership role at the San Francisco AIDS Foundation.