Spirit of Stonewall Award – Stonewall Service
Awarded to a group or organization, which may or may not identify as lesbian, gay, bisexual, or transgender, but who has stalwartly supported the LGBT community over an extended period of years and/or has made an exceptional contribution in the past year. 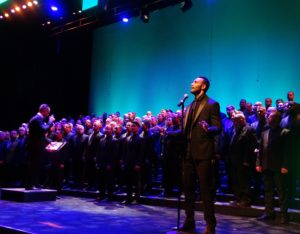 With more than 250 members, the San Diego Gay Men’s Chorus is packed full of singers on a mission to change lives one voice at a time. Founded 32 years ago during the AIDS crisis and rampant discrimination, the volunteer singers have always stood loud and proud, embracing the positive power of music to change hearts and minds.

Today, the Chorus has sung at the White House, the Super Bowl and most every venue in San Diego from Petco Park’s center field to the Mayor’s inauguration. Just weeks ago, SDGMC’s acclaimed Chamber Chorale made its Lincoln Center debut, bringing to the world’s most famous stage the anti-bullying message of gay music student Tyler Clementi in Tyler’s Suite.

During the past year, in partnership with the San Diego Padres, the Chorus helped more than 800 LGBT youth attend its concerts for free.  The singers partnered with the California Youth Conservatory Theatre in its production of Billy Elliot—The Musical. Currently underway is the musical version of children’s book A Peacock Among Pigeons, about celebrating what makes us stand out in a crowd with an anti-bullying message of special relevance to LGBT youth.

SDGMC is committed to serving its community even beyond its music. Most recently, it partnered with the Tijuana AIDS hospice to gather and deliver “wish list” supplies, conducted a food drive for Mama’s Kitchen and helped local Wounded Warriors families sit down to a festive Christmas dinner. The Chorus has also partnered with Rady Children’s Hospital Gender Management Clinic, the Veterans Village of San Diego, and the Boys and Girls Clubs.