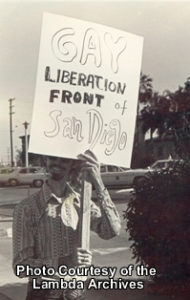 In the aftermath of the Stonewall riots, a number of radical gay-rights groups began to form in New York and spread out from there. One of the first local gay pride groups to organize here in San Diego was the local chapter of the Gay Liberation Front. Stonewall was a wakeup call for the gay community. Surprisingly, in a world before email, the internet and text messaging, word traveled fast and within months local students at San Diego State College began to organize to make the GLF one of the on-campus clubs.

While he was a student at SDSC, Stephen Bell was one of the early members of the GLF and was later one of the presidents of the organization. The GLF was a small but very vocal organization with a number of accomplishments to its credit before it disbanded, not the least of which was laying the foundation for what would one day become the LGBT Center.

In 1970, Stephen attended what could be considered the first Pride event in Presidio Park hosted by the GLF. It was a “Gay In” and approximately 100 people showed up. The numbers were small by today’s standards, but it was a huge milestone for the San Diego Gay Pride movement. It took place in public, in the daytime, with posters and signs with slogans such as “I’m gay and that’s okay.” 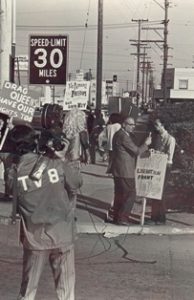 Stephen was also involved in making sure that San Diego’s gay community was represented in the growing national gay dialogue. In 1971, he suggested that the San Diego GLF send representatives to the first-ever national gay conference in Chicago. The Chicago meeting was an important milestone, and in many ways it set the tone for the gay pride and gay rights movement for years to come.

Also in 1971, Stephen led what was up to that time one of the most visible gay protests. Stephen and approximately 20 members of the GLF picketed the police station because the police had been targeting gays for harassment. The picketers walked up and down the sidewalk carrying signs such as “Gay Liberation Front” and “Drag Queens Have Our Rights Too” and other slogans. They even invited the media and Stephen was interviewed by a Channel 8 television crew. 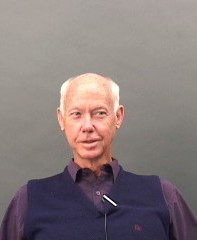 Stephen graduated with a degree in sociology but instead chose to pursue his childhood interest in dancing by teaching at Arthur Murray’s dance studio and then opened his own dance studio. Later, he entered the computer field and worked in the desktop publishing field for many years. Today, he is semi-retired and although no longer active in the LGBT community, he was a critical part of its foundation.