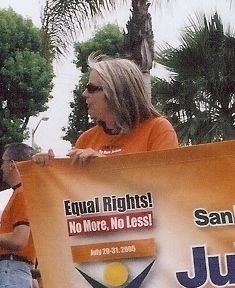 Suanne Pauley first became involved with Pride in 1988 when she volunteered for Parade Fest. It was the first year that the festival had been moved to the parking lot of the old Naval Hospital on President’s Way. She stayed with the organization and, over the years, she began to take on more and more responsibility in roles such as Stage Manager and Operations Manager. Then, following the resignation of Mandy Schultz in 2000, Suanne stepped up into the position of Executive Director.

In her six years as Executive Director, San Diego Pride cemented its position as one of the top Pride destinations in the country. Parade attendance topped 150,000 during her tenure. In that same time, the festival grounds, which once seemed to be more space than we could ever ask for, became increasingly crowded, requiring the festival space to expand north towards Laurel Street/El Prado.

During her tenure, Pride was dedicated to embracing the diversity in our community. One of the most obvious ways in which this was done was by making the annual Pride program a bilingual publication. Pride recognized that Spanish-speaking households represented one of San Diego’s largest minorities, so most articles in the program were written in both English and Spanish.

In the first few years of Suanne’s tenure, a number of Pride splinter groups formed to represent segments of the community: Ebony Pride and Latin Pride both scheduled events which took place within a month or two of San Diego Pride. Pride supported both of these groups, just as it does with the North County and South Bay Prides, going so far as to sell a Pride Pass one year which would provide entry to both days at San Diego Pride, as well as the Ebony and Latin Prides.

Another way in which Pride addressed the diversity in the community during Suanne’s time as Executive Director was by changing the name of the organization. What had been known as San Diego Lesbian and Gay Pride since the early 1990s became San Diego LGBT Pride. This officially recognized the bisexual and transgender members of the community and gave them their place in Pride. 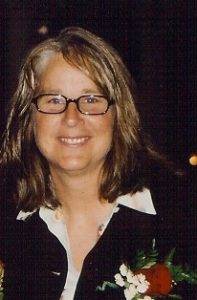 In those days, few local organizations which served the community performed background checks on their volunteers, and once the problem was discovered Suanne and the Board of Directors consulted with law enforcement and attorneys. Based on that advice Pride chose to allow the four people stay with the organization. Nevertheless, certain members of the community with disproportionately large voices joined Hartline in vilifying Pride for not foreseeing a problem that hadn’t existed before.

In the end, the 2005 event was a success and, despite the attacks on Pride by Hartline and his allies, the issue never seemed to gain traction within the larger gay community. Behind the scenes however, Pride lost a number of people. After the event, several volunteers, staff and Board members resigned.

Suanne Pauley was one of those who resigned over the whole affair. Since then, she has largely remained out of the spotlight, but she is remembered for all the things she did for Pride. From her first year as a volunteer in 1988 through her time as Executive Director, she worked diligently to take Pride to the next level.