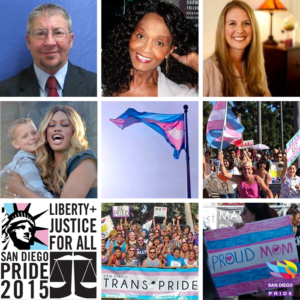 From the streets of Greenwich Village to the cover of Time magazine, the trans* community has come a long way.

Since well before the Stonewall Riots of 1969, trans* people have been standing up and fighting for our rights, dignity, and equality, right alongside our LGB siblings. In fact, three years before Stonewall, in 1966, a group of trans* women took a stand against discrimination and police harassment in Los Angeles – an event now known as the Compton Cafeteria Riots.

At Stonewall in ‘69, trans* & gender non-conforming activists like Marsha P. Johnson, Miss Major, and Sylvia Rivera played a huge role in the riots and ongoing movement that rippled forth.

While the trans* community has gained some increased visibility in recent years, we continue to face a disproportionate amount of discrimination, legal inequality, and hate-driven violence.  It has never been more important that our entire LGB community stand in solidarity with our trans* siblings in the struggle.

The Community Grand Marshal contingent will include trans* and gender non-conforming individuals from all walks of life standing side-by-side with friends, families, and allies.

Our hope is to highlight the T in LGBT as we continue our shared struggle, honoring the contributions of people who are trans* and gender non-conforming in the pursuit of liberty and justice