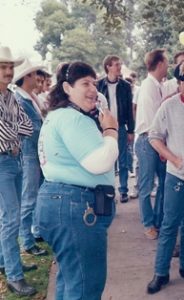 Wendy Sue Biegeleisen first got involved in Pride in 1980 as part of the Lesbian Solidarity movement. That year, the Pride committee changed the annual march into a parade. Their idea was that, instead of being a protest against homophobic people, attitudes and discrimination, it would be a celebration of their sexuality. Other cities had made a similar change and it was done in part to increase both attendance and participation in the event, but a significant portion of the lesbian community was against the change. As Wendy Sue put it, “We didn’t feel that we were there yet, we still wanted the march to be a march.”

As a result, those lesbians broke away from Pride and formed the Lesbian Solidarity movement. Lesbian Solidarity was celebrated within a week or two of Pride, and featured a march and rally, both of which had heavy political overtones. Lesbian solidarity continued as a separate event until 1983 when they rejoined the Pride movement and became involved with Lambda Pride.

By the time the women of Lesbian Solidarity again became a part of Pride, one of the main concerns was the threat posed by the fundamentalists, or fundies, as they were called. In the 1980s, hundreds of fundies protested along the parade route and Wendy Sue became involved in the anti-fundy security for the parade. She became one of the Future Former Fundy Fighters, who were a group of people who volunteered to act as a human buffer between the parade participants and the fundies.

Wendy Sue and the other Future Former Fundy Fighters wore white shirts and purple sashes and would usually stand out in the street to provide approximately one lane’s worth of space between the parade and the fundies. This proved remarkably successful and was responsible for keeping the peace for a number of years.

The only instance Wendy Sue can recall that this didn’t work was in 1986 when the police wouldn’t allow the Fundy Fighters to stand out in the street. Instead, they were required to stand on the sidewalk with the fundies themselves. This meant that there was no buffer zone between the parade and the antagonistic fundies, and as a result a confrontation between one of the fundies and one of the parade participants ended with the parade participant being tackled to the ground by five or six police officers. 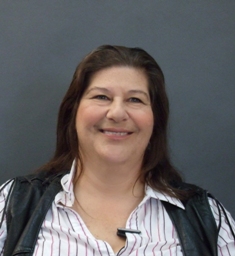 As head of security, Wendy Sue worked hard to make sure that this didn’t happen again. She worked with the police liaisons and community members to ensure a peaceful parade and there were no repeats of this incident. Relations with the police eventually improved, partially due to a change in administration, and partially due to the fact that the leader of the fundies was found guilty in connection with a failed abortion-clinic bomb plot. Wendy Sue continued to head up the security contingent until the end of the 1980s by which time the fundies had for the most part faded away except for a few die-hards.

These days, Wendy Sue is still an active and activist member of the LGBT community, as well as the Leather community.