200 Years of Freedom for Whom? 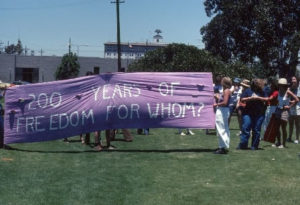 While the rest of the country was celebrating the bicentennial and preparing for the 200th anniversary of the founding of our country on Independence Day, San Diego’s gay community was planning its Pride events. The theme of “Gay Spirit” played off the bicentennial fever sweeping the country. While the rest of the country was celebrating its freedom, marchers in the 1976 march carried banners and signs which pointed out the gay community’s own quest for freedom. One large banner asked the question, “200 years of freedom for whom?”

With the experience of 1975 under their belt, Pride organizers were better prepared for the challenges they would face from outside the community. Permits were obtained, again with the aid of supportive lawyers, and plans were made for a march/parade* and rally with a bicentennial theme, but the event was almost cancelled due to infighting over the involvement of the Socialist Worker’s Party.

The Socialist Worker’s Party
In the 1970s, the Socialist Worker’s Party (SWP) was a left-wing fringe party that experienced significant growth as part of the anti-war movement during the Vietnam War. The SWP was largely unfocused, with many factions on the local level who often had their own agendas. Here in San Diego, the SWP was very supportive of gay rights. They turned out in large numbers for the Pride marches, but the size of their contingent was also a cause of concern for some members of the community.

The concern was that the SWP’s numbers were so great, and their signs and banners so large, that it took away from the purpose of the march. It was supposed to be a gay march, not a recruitment opportunity for the SWP. People said that the signs carried by the SWP in 1975 emphasized the organization instead of a pro-gay message.

In those days, the event was planned by ad-hoc committees that met at the Center and meetings of the Pride committee became mired in a fight over the involvement of the Socialists. Opponents of the SWP first tried to exclude banners with a political message, and later ended up banning all contingents from carrying signs in order to be fair. However, the SWP circulated a flyer proclaiming that nobody “owned” Gay Pride and vowed to carry whatever signs they chose.

As a result, with only weeks to go before Pride, many members of the community and many organizations threatened to withdraw from the march. The Center, MCC-San Diego, MCC-Oceanside, Military Off-Limits Defense Fund, The Imperial Court of San Diego, Dignity of San Diego, and the San Diego Tavern Guild all withdrew at the time.

In the end, Pride went on as scheduled, and the SWP marched without the banners, but the issue would be revisited in the future, as none of the issues between the two camps were ever resolved. The situation with the SWP wouldn’t finally come to a head until 1978, after which the Socialist Worker’s Party began to fade from the scene.

*It should be noted that the terms “parade” and “march” were both used at the time but it is described by most people as more of a march for most of the 1970s.