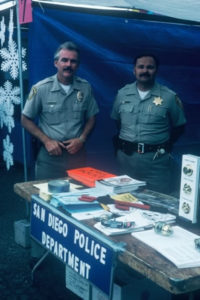 Rebirth
After the financial disaster of Parade Fest the previous year, it looked as though Pride might be a dead issue in San Diego. It was the 20th anniversary of Stonewall and the 15th annual San Diego Pride*, and members of the community wanted to celebrate, but most people were unaware of the behind-the-scenes problems associated with Pride beyond what had been reported in the community papers. Those in the know realized that for Pride to live, things would have to change.
It was time to make Pride professional. Christine Kehoe, Neil Good and other members in the community formed the 15/20 Committee to explore the possibility of taking Pride in a new direction. They recognized that Pride needed to be about doing what was best for the community rather than pushing a particular agenda or promoting a pet cause. Most of all, they recognized the need for stability after years of constant turnover.

The committee knew that credit from vendors who had been burned by Pride in the past would be hard to come by, so they approached the Center to ask for financing. The Center came through for them and loaned them the money, although there were a few strings attached because the Center wanted to make sure that they weren’t throwing good money after bad. As a result, Pride became a committee of the Center and operated under the umbrella of the Center’s 501c3 for years to come.

Fresh Start
One of the problems faced by previous Pride organizations was that the Board was a working board, rather than a policy board. The board would often consist of a parade chair, a festival chair, entertainment chair, etc., and each of those board members essentially had carte blanche as they worked to accomplish their goals. There was often little oversight or coordination between board members, as evidenced in 1986 when the Lambda Pride festival chair told newspapers that the event was going to be gargantuan, but only days later Lambda Pride announced that the festival was canceled due to lack of funds.

The 15/20 Committee wanted to make the Pride Board a policy-setting Board rather than a working Board. In practice, this didn’t occur immediately, but it was a goal they set for themselves. The first step in this direction was the hiring of an Executive Director. Their vision was that the Executive Director would take over the day-to-day planning of the event. This was how most larger organizations were run, including the Center, but it was a first for a Pride organization.

Executive Director
When the committee put out the call for an Executive Director, they only received one response but it was a perfect fit. Tim Williams was a professional event planner. He had worked for The Greater San Diego Chamber of Commerce, coordinating events such as Art Walk. He knew how to get things done and how to work with and coordinate volunteers. Many of the systems put in place by Tim Williams are still in place today.

He created the structure of volunteers, supervisors, coordinators and managers to provide stability and continuity to the organization. In this system, more experienced volunteers would constantly be moved up so that if a manager left a position, a supervisor or coordinator who knew the ropes would be able to step into the position.

The creation of this new structure for Pride would be the first of three big changes that would help take San Diego Pride to the next level.

Event
With new leadership and staff in place Pride was ready to go. The parade, with Grand Marshals Jeri Dilno and Jess Jessop, followed the usual route from Balboa Park, up to Robinson, and back. The next stop was the Organ Pavilion for the rally immediately following the parade. Finally, the Festival took place at the Old Naval Hospital parking lot. With 1988 fresh on everyone’s mind, the committee and staff were nervously optimistic.

They shouldn’t have worried; it was a huge success. Treasurer Joe Mayer’s meticulous attention to detail revealed that they turned a profit of $23,590 after all expenses. Fiscal restraint and a strict budget had finally resulted in an organization that could be self-sufficient. It appeared as though Lady Luck had smiled on Pride at last.

Unfortunately, The Lady can be fickle… as they learned the next year.