Historic Night as Padres and San Diego Pride Team Up

OUT at the Park returns better than ever as San Diego Pride and the Padres team up for another historic and eventful night. 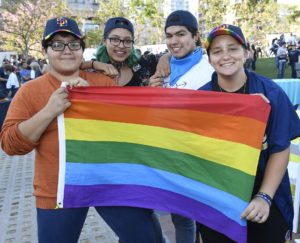 With over 90% of tickets sold, the community-favorite event is poised to sell out due to its growing popularity with LGBTQ groups, families, and Padres fans.

“Last year, the Padres made history. Petco Park, home of the Padres, became the first MLB ballpark to have a gender-neutral, multi-stall restroom. Furthermore, their staff joined ours along with LGBT elected officials, MLB Inclusion Ambassador Billy Bean, the San Diego Women’s Chorus, and the San Diego Gay Men’s Chorus to sing the national anthem in solidarity,” said San Diego Pride Executive Director Fernando López. “This year, the Padres are taking further historic steps forward by having our Pride Youth Marching Band perform before the game, and by having our Military Department’s colorguard to present the colors. This is the type of LGBTQ progress that is possible when we work hand in hand with our partners.”

“I am so excited to attend OUT at the Park. Seeing the San Diego Padres and San Diego Pride work closely together to grow this event, and create such a powerful message of inclusion, acceptance, and community warms my heart,” said Vice President & Special Assistant to the Commissioner Billy Bean. “As a former Padres player, I wish I had been able to see this kind of unity, it would have changed my life and career.”

Guests are encouraged to arrive early to enjoy the pre-game, family-friendly “Tailgate Party” happy hour event in our VIP space from 4:30pm to 7pm (food and drinks not included). The event is in conjunction with CocktailFest and features openly lesbian DJ Kinky Loops.

“The Padres are proud to collaborate once again with San Diego Pride on this year’s OUT at the Park event,” said Tom Seidler, Padres Senior Vice President of Community & Military Affairs. “We are thrilled to continue this partnership and host the LGBT community at Petco Park for what promises to be a great night.”

Get your tickets now at padres.com/pride. Free tickets are avaliable for LGBTQ youth by emailing [email protected]