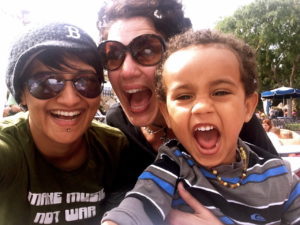 Danielle LoPresti and Alicia Champion have been committed partners as well as music and community leaders in San Diego for the last decade. Impassioned human rights activists, the couple created a renewed music scene in San Diego around diversity and community. Both openly bisexual, Danielle and Alicia felt marginalized as entertainers who all too often had to choose between mainstream, “straight” events, and the more exclusively LGBT-focused ones. They created a large scale music event that defied the typical separatism between LGBT and mainstream events that brought in an audience that reflected the way they saw the world. In 2004, Danielle and Alicia ambitiously put on the very first San Diego IndieFest with a mission to celebrate and unify.

Ridiculed by many mainstream local press outlets, the Gay & Lesbian Times acknowledged their triumph with the event’s first cover feature. Despite rejection, Danielle and Alicia continued year after year, growing the festival into what’s regarded now as one of the City’s signature events. As activists, Danielle and Alicia are known for their dynamic and socially-conscious performances, to public demonstrations and City Council meetings, speaking out passionately about marriage equality, nonviolent conflict resolution, adoption advocacy, safe access for medicinal marijuana, limits on Hillcrest high rise development and more.

While seemingly tireless in their efforts, 2013 slowed them down. Last January, on her forty-fourth birthday, Danielle was diagnosed with advanced stage cancer. She embarked on an eight month long treatment program including surgeries, intense chemotherapy, naturopathy, and acupuncture. Danielle and Alicia felt the bond of their love more powerfully than ever before as they walked together through the agony and downright horror of that time, all while raising their newly adopted baby boy, and somehow managing to produce the largest IndieFest event to date.