2018 was a year of incredible growth for San Diego Pride, one full of vibrant celebrations, victories, challenges, and triumphs that showcased the resiliency and love our community has to offer. To those of you who have volunteered countless hours, donated skills and time, and celebrated with us, we thank you. Take a look back at some of the top moments of Pride from this last year.

Year-round volunteer engagement is the heartbeat of Pride and our civic engagement work. We started off the year with a new partnership with Habitat for Humanity, undertaking a variety of jobs including building homes, doing restorations and yard work, and staffing donation centers.

This set the tone for a year full of volunteer-led successes!

Join us for the 2019 MLK Holiday Parade.

In 2018, our youth programs saw significant growth as we continue to expand services to meet the needs of our LGBTQ youth.

We held the 2nd annual youth art show in March which showcased art from LGBTQ students from around the county. This art installation was also shown in the San Diego Repertory Theater and the San Diego County Fair. 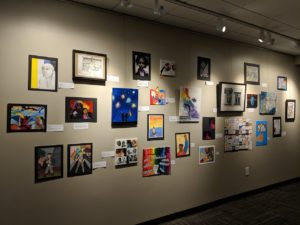 The office had a number of youth interns who were integral parts of making the parade and festival a success, increased our voter engagement efforts, and revamped the GLSEN local school climate survey.

Our Festival Pride Youth Zone saw over 300 LGBTQ youth over Pride weekend and was created by LGBTQ youth who worked throughout the year to create a space for themselves, by themselves.

Every second Saturday of the month, LGBTQ youth gathered for our monthly Lunch Bunch. We had LGBTQ sex-education, discussed mental health, created genderbread cookies, had our first friendsgiving, and even took field trips to OUT at the Park, She Fest, and the San Diego County Fair – OUT at the Fair.

One of our biggest field trips was to Sacramento, taking LGBTQ youth to Equality California’s Lobby Day where they met with elected officials to lobby for themselves and LGBTQ rights! 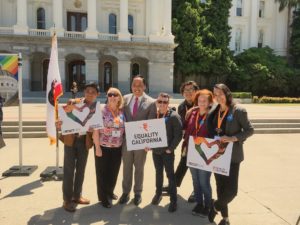 Our annual Pride Youth Leadership Academy saw its biggest group yet with over 50 youth from throughout Southern California attending a one-day workshop at Balboa Park’s San Diego History Center where youth were immersed in LGBTQ history, youth advocacy, and network building. 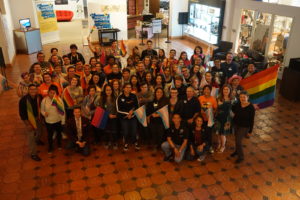 In partnership with San Diego Mayor Kevin Faulconer, the Interfaith Shelter Network of San Diego, and St. Paul’s Episcopal Cathedral, Pride hosted the Interfaith Shelter Network: LGBTQ Summit with the goal of reducing LGBTQ homelessness in San Diego. The summit provided tools for congregations to help some of our most vulnerable residents as they work toward securing permanent housing.

5. March for Our Lives

In March, LGBTQ youth from Pride’s youth-led programs organized a contingent for San Diego’s March for Our Lives in support of the victims of the February 14th shooting in Parkland, Florida, calling for greater school safety and an end to gun violence. Read the Huffington Post article here. 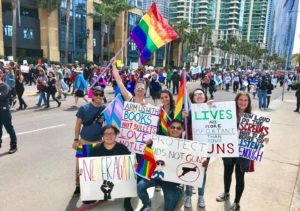 LGBTQ youth and staff at the March for Our Lives March

In April, in partnership with The San Diego LGBT Community Center, The Center for Community Solutions, North County Lifeline, The San Diego Chapter of CAMFT, and 211 San Diego, Pride hosted the first #MeTooLGBTQ Conference in order to increase culturally competent services in San Diego county for victims and survivors of sexual violence who identify as LGBTQ. The first step in a long-term solution, the second conference, slated to take place in April 2019, is already being organized. 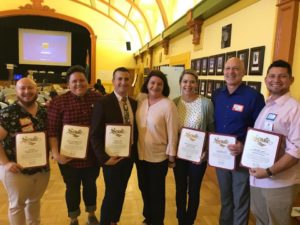 OUT at the Park was back for another year as we watched the Padres take on the New York Mets at Petco Park. Many firsts happened as our very own LGBTQ Military Contingent presented the colors as the San Diego Gay Men’s Chorus, San Diego Women’s Chorus, LGBTQ Elected Officials, Padres staff, and San Diego Pride staff sang the national anthem together. Then our very own Ryland Whittington threw out the first pitch! Tickets are already on sale for next year’s OUT at the Park!

Click here to purchase tickets for 2019 OUT at the Park.

In another first, thanks to funding from the Department of State, in May Pride hosted a one-day binational educational leadership capacity-building summit entitled “Orgullo Sin Fronteras” in Tijuana, Mexico. Over 200 people participated in our first year, and planning for the 2019 summit is already underway!

If you’re interested in lending your talents to the planning group, email Jen LaBarbera at [email protected]

2018 was an election year, and Pride was ready to help get out the vote. Our volunteers regularly took part in nonpartisan GOTV phone banks and canvassing locally and led West Coast Solidarity phone banks to protect the rights, dignity, and equality of transgender people in Massachusetts. 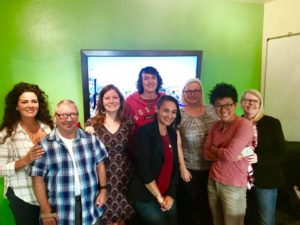 We kicked off Pride week with She Fest in North Park! This woman-centered event included live performances, workshops, and even a dog fashion show. Our planning committee is already hard at work planning She Fest 2019. Click here to learn more.

Pride and St. Paul’s Episcopal Cathedral held an LGBTQ interfaith event, Light up the Cathedral, during Pride week with Keynote Speaker and trans Latina minister, Nicole M. Garcia. LGBTQ interfaith leaders were honored, and the Cathedral was lit up in rainbow colors. Also this year, Pride established DevOUT, an interfaith coalition committed to organizing communities of faith for LGBTQ justice and to creating compelling open and affirming faith-based programming for our community. 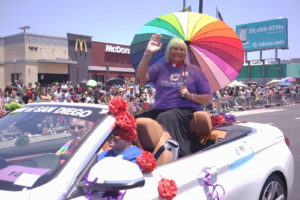 12. The Spirit of Stonewall Rally

We always honor our origins at our annual Rally. This year we were especially honored to have San Diego’s first openly LGBTQ elected official, Sen. Christine Kehoe, open up the event with all our regional LGBTQ elected officials on stage as she spoke about building political power. Nominate your LGBTQ here for the 2019 Spirit of Stonewall Rally.

On the Sunday of Pride weekend, TLC took to the stage to a record-breaking crowd that was ready to hear hits like No Scrubs, Unpretty, and Waterfalls! It was the perfect way to end Pride weekend. 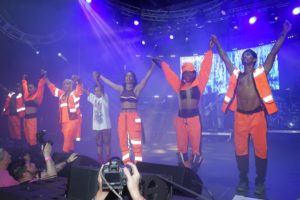 Pride World Forum was held during Pride weekend at the San Diego History Center in partnership with the San Diego Diplomacy Council. Attendees were able to hear from a panel of LGBTQ leaders from around the globe about the LGBTQ movement and their experiences in their respective countries. 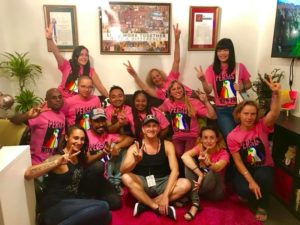 2018 saw the creation of the LGBTQ Latinx coalition which seeks to strengthen the educational, health, cultural, civic, political, and economic power of our LGBTQ Latinx community and the region. Together with the LGBTQ Black Coalition, they created areas in the festival for LGBTQ individuals living at those intersections of identity to find community and resources. Inspired by this, members of the LGBTQ API community came together to form a new LGBTQ API Coalition to create a similar space at next year’s festival! 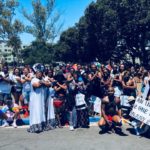 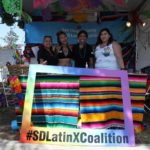 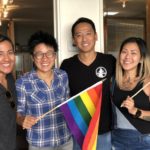 As a founder of InterPride, San Diego Pride attended this year’s international conference in Saskatoon,Saskatchewan, Canada to meet with Pride organizations from across the globe. Thanks to our efforts, U. S. Department of State, Special Adviser for LGBTI Human Rights, Jonathan Lalley was able to attend and educate folks from all around the world on how they can obtain funding and support from our government! 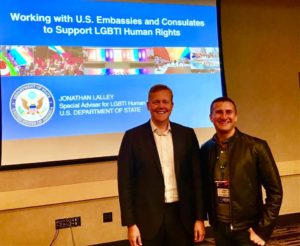 In coalition with several local organizations and individuals, San Diego responded to the Department of Health and Human Services memorandum announcing a move to “narrowly define gender as a biological, immutable condition determined by genitalia at birth,” by hosting the We Won’t Be Erased Teach-In followed by the Won’t Be Erased March and Rally supporting and led by our transgender, intersex, and gender-nonconforming community. 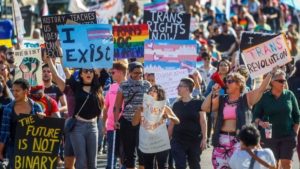 Transgender activists and supporters marched Saturday during the “Won’t Be Erased” protest against the federal government’s move to more narrowly define gender as male or female.

19. LGBTQ Families During the Holidays

Pride and our community partners gathered in North Park to ensure that LGBTQ families were represented in the North Park Toyland Parade! It was a blast as we wished parade goers happy holidays and handed out candy canes. 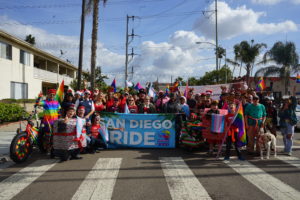 This year we saw an unprecedented amount of attendees at our parade and festival. Our parade saw over 250,000 cheering spectators, and the festival had over 45,000 people help us to celebrate. An independent economic impact study conducted by San Diego State University determined that San Diego Pride’s impact on San Diego region to be $26.6 million dollars! 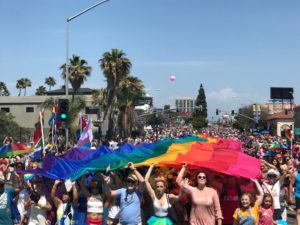 21. Investing in Our Community’s Future 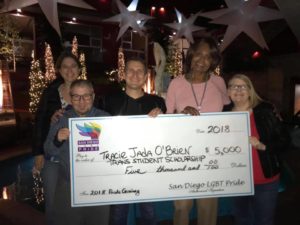 Due to the unprecedented attendance and resulting financial success of the 2018 Pride events, we were pleased to announce that our 2018 charitable giving exceeded $170,000. The donations will be distributed to 59 LGBTQ-serving organizations, in accordance with Pride’s mission to support LGBT communities locally, nationally, and globally. Read the entire press release here. 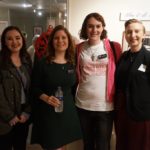 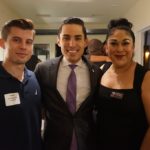 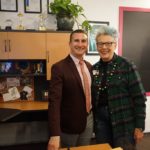 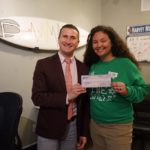 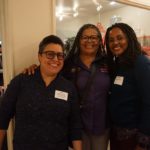 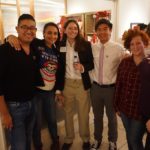 Be sure to join us next year as we celebrate Stonewall 50: A Legacy of Liberation.

Support our growing programs by donating or purchasing a ticket to July’s celebration!

My first year as ED

The Art of Our Legacy